German Doner Kebab continues to revolutionize US Market with new hires. Their game-changing gourmet kebabs are served in over 100 restaurants throughout the UK, Europe, North America and the Middle East.

They opened their first store in Berlin in 1989 and spent the next decade perfecting their policies and procedures, their unique blend of traditional spices and exclusive products, as well as refining and improving their innovative cooking processes. 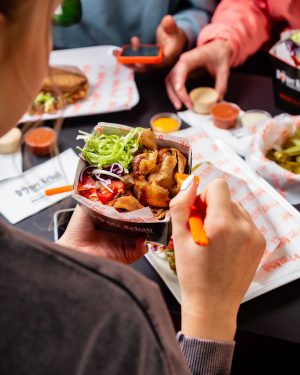 German Doner Kebab opened its first U.S. location in 2021 at the American Dream Mall in New Jersey. It aims to expand significantly with plans to build ten restaurants in 2022. Clyde Foods has signed on as a multi-unit developer in Houston for 15 locations, with an agreement that includes 15 locations over the next decade, and five open by 2025. A franchisee has also signed on in Dallas to develop five locations in the city and its northern suburbs.

Moreover, the kebab brand has committed to this growth with a number of senior hires to assist this scale of expansion.

Bray will report to the brand’s North America director, Nigel Belton. Bray has over 20 years of restaurant experience with YUM! Brands and was most recently senior regional franchise director at Church’s Chicken. Treptow has been involved with a number of franchise brands such as Five Guys Burgers and Freshii, and has helped turn them into major national and international brands. Cavendish joins from Island Poké, a brand owned by GDK’s parent company, Hero Brands. Cooke joins the team after picking up experience at brands such as Kroger, Virgin, Adidas, Starbucks, and Google.

“As the global industry leader, GDK is revolutionizing the doner kebab experience, and we’re excited to bring our fresh, high-quality taste sensation to North Americans who are looking for an alternative to the burger and sandwich,” said Belton.

“We’ve assembled a team of stellar executives with a wealth of food and beverage experience, and we’re excited to utilize their expertise to aid in our continued growth.”

“It is exciting to have the opportunity to shape the creation of the processes, behaviors, and relationships with our franchisees to help GDK grow in North America,” said Bray.

“As we continue our quest to bring the doner kebab sensation to the people, I look forward to creating a guest experience that will keep them coming back again and again for our fresh food and great service.”