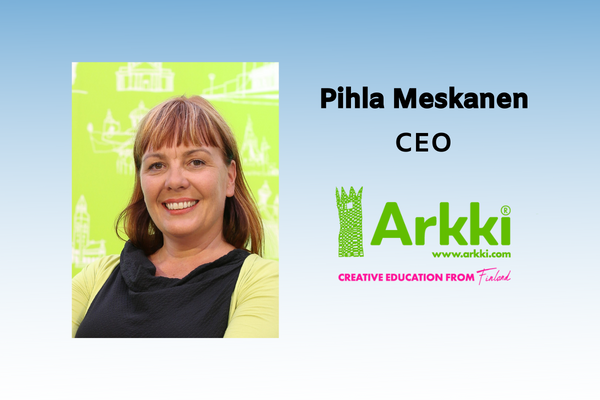 Arkki‘s awarded after-school program is licensed world-wide to 10+ countries. Arkki provides creative education using architecture & design as holistic real-world phenomena to teach creative thinking and innovation skills to children and youth, and to cultivate broad-based cultural and civic literacy. Architecture offers endless possibilities in being the big A in STEAM education, holistically intertwining Science, Technology, Engineering, Mathematics and Arts through Architecture. Arkki´s curriculum has been officially approved by the Ministry of Education in Finland in 2007. Arkki´s pedagogical program follows the guidelines of the National Core Curriculum of Basic Education in Architecture.

In this interview we find out more from Pihla Meskanen (1970) who is an Architect (M.Sc), pedagogue (B.A), entrepreneur, innovator, author, co-founder of Arkki School of Architecture for Children and Youth in Finland (1993), and CEO of Arkki International (2013) that licenses the Arkki concept.

Meskanen has also participated in drafting the National Curriculum. To acknowledge her work in the field of creative education, Meskanen has received the honor of the Knight First Class of the Order of the Lion of Finland, conferred by the President of Finland 2018, the Asko-Avonius Prize 2018, the Pietilä Prize 2004, the Children’s Culture State Award in 2005, and chosen Art Educator of the Year 2013.

1. How did you enter the franchise business?

Originally the Arkki program was designed as a solution for after-school creative education in Finland for ages 4 to 19. The Arkki program follows the guidelines of the National Core Curriculum of Basic Eduction in Visual Arts/Architecture in Finland, and The Ministry of Education and Culture has approved the curriculum in 2007. I am a co-founder of Arkki Assn in Finland (1993) and have been developing the program ever since. The program gained world-wide interest, recognition and multiple awards throughout the decades. To answer the growing franchise interest, I established Arkki International in 2014, which licenses the Arkki program, and develops and productizes the concept to suit international markets.

2. Where and how did the idea of your concept come from?

The original idea came from my mother in 1993. (She is an architect like me, and was an advisor to the National board of Education in 1992 in creating the first National Curriculum of Architecture Education. Since 1993 the concept of creative education via architecture has been developed at Arkki Finland. Architecture is a multidisciplinary subject, that provides a perfect context for combining e.g STEAM subjects (Science, Technology, Engineering, Art, Math) and humanities. During the 28 years, Arkki has created a step-by-step curriculum that covers ages 4 to 18, as well as creative courses covering different fields in design.

3. What inspired the brand name?

The brand name Arkki is an abbreviation of the work Architecture (in Finnish ARKKItehtuuri), and in Finnish language it also means a sheet of paper (FIN Arkki) as well as a vessel, Ark (FIN Arkki). So it refers to architecture, paper and construction.

4. What is the story behind the brand’s logo?

The picture in the logo, the checkered tower is designed and drawn by a 7 year old pupil in the first year of the Arkki classes in 1994. The designer is actually my little sister, who later became an architect as well, and taught several years as an architecture facilitator at Arkki in Finland. The logo in itself has been updated a few times.

5. What makes your brand different from your competitors?

Arkki is a pioneer in its field, and unique as a concept. Arkki is the only brand in creative education via architecture and design providing a long-term step-by step curriculum for children and youth. The Arkki program covers different fields of design, like interior design, architecture, urban design and product design, and is the only program combining multiple STEAM subjects together through creative project-based pedagogy. The multidisciplinary creative program supports the 21st century skills and competencies, fosters design thinking and enhances the essential higher-order thinking skills needed for the future world of work. Arkki´s exceptional pedagogical concepts inspire children to learn playfully through cross-curricular, phenomenon-based and hands-on 3D experimentation projects. Play, Create, Succeed is Arkki´s motto.

6. What are the essential qualities that you look for in a franchisee?

1. Financially sound and reputable company, with strong interest in future education.
2. Strong understanding of local education characteristics and culture, and capabilitiy to scale up in the local market.
3. Visionary attitude, and a strong belief that creative education can make a change.

7. How long does it take, on average, for your franchisee to realize their investment?

It varies depending on the location, and is also up to the franchisee. We support potential franchisees in their local market research and calculations beforehand, with the goal to have ROI the earliest. On average, the payback time is 1,5-2 years.

8. What was the major challenge you faced in your career and how did you overcome it?

There has been a multitude of obstacles in my career. ”Where there’s a will there’s a way” is the english phrase, but I think the Finnish version “Persistence will get you through the grey stone” describes some of my experiences more accurately. I think believing in your work, and continuing even if it seems impossible or even hopeless at times, will eventually leed to success.

8.1 What is your best achievement?

To have developed a business that positively impacts the education and future of children and of course I feel happy having received many recognitions for this work, like the Children’s Culture State Award (2005) at the age of 35, and the honor of the Knight First Class of the Order of the Lion of Finland, conferred by the President of Finland (2018).

9. How does your business day start?

It varies a lot, as we have licensee partners in different time zones. Some meetings are early in the morning, some late at night. In the mornings I try to concentrate in writing, and afterwards deal with running chores. At lunch time I love to browse our partners social media channels to keep up with projects around the world.

10. What was your best moment throughout your franchise career?

One very special moment was entering the final exhibition of our Children Innovate project in Ho Chi Minh City. The project was the first ever participatory project in Vietnam involving children in urban design (300 kids ages 6 to 14), and was conducted with our local licensee. It won the Unicef Child Friendly Cities Inpire award in the category of Meaningful Child participation. When I entered the exhibition and saw all the kids’ visual and verbal presentations on their ideas of making HCMC more child friendly, I felt that I really had contributed to something meaningful and lasting beyond my time.

Arkki is now in 10 countries, and expanding. We see the program being successful in different cultures and continents, so in the next 5 years i believe we will see it in at least 10 more countries.
Since architecture is intrinsically interdisciplinary, creative education through architecture is an exceptional discipline to develop key competencies like the “5C´s” – complex problem solving, creativity, critical thinking, communication, and collaboration.
We hope to become the first choice of parents when it comes to future skills and creative education.

12. Any tips you want to impart to our readers who want to be in the franchise industry?

Franchising gives you a possibility to work with a well designed and tested concept. By franchising, you can skip years of testing and developing a concept, and jump right into expanding and scaling the business. Franchisors and franchisees are like a family, together we achieve the goals.